You are here: Home / Family / Diary of a Wyoming Elk Camp

As a third-generation Wyoming native, I grew up in a hunting family. Although I’ve never hunted for anything larger than an unsuspecting bunny on the prairie, I’ve long admired my brother, Andy, for his big game hunting prowess. You’re in for a treat today, because he graciously agreed to share his latest hunting adventure (and amazing photos) on the blog! Without further ado, here’s Andy Bartosh.

When I was a kid, my grandparents would take my brother and me fishing. For several days we would fish the streams of the Big Horn Mountains in northern Wyoming. Granny was a worm dunker and Grandpa was a fly caster. Whether it was concocted or exaggerated in our young minds, there was a competition between the two – Granny and Grandpa; worms and flies.  You’re probably wondering what my fishing experiences have to do with elk hunting.  Let me explain….

My wife, Pam, and I typically hunt elk every year, and we’ve been fortunate enough to eat more wild meat than beef for many years. Following the 2017 elk season, our son-in-law, Zak, asked if we would join them for elk camp next year. We had never been a part of “elk camp” before, so it was with some trepidation that we agreed.

Our typical hunts are one or two day affairs, where we return each night to the comfort of our home. We hike into an area that has high potential of sheltering elk, and if we don’t see any, we find a high spot and pull out the binoculars. Once we locate elk, we make a plan and hope the wind, the elk, and all of the other variables will cooperate. Some years we forego the hike and just arrive before sunrise and glass for elk. I call this methodology “spot and stalk.”

Elk camp was completely different. It consists of an eight hour drive to get to the area and lasts for a week. Plans are devised before ever seeing an elk, and you had better remember everything because there’s no going back home to retrieve anything (or to sleep in your warm bed). It was like switching from night crawlers to flies! For someone who has never participated in such an event, the preparation alone was challenging.

Preparing for the Hunt

Pam and I had just purchased a new camper and we decided to take it to elk camp. Even during the summer, we had found that cool nights strain the batteries as the heater strives to keep the camper warm. Our elk camp was in an area west of Big Piney, Wyoming, often referred to as “the ice box of the nation.”  The weather in October can be very similar to September – or not. Sometimes the snow is a foot deep and temperatures hover in the sub-zero range. As we prepared for elk camp we hoped for an Indian summer, but we planned for Old Man Winter.

The first concern was keeping the batteries charged. We have generators, but who wants to listen to a generator all night? I started building a solar system (not having a clue how to do it) that would charge the batteries during the day. The next concern was keeping the water lines from freezing. We figured the lines were safe down to 20ºF as long as the temperatures warmed up during the day. As the departure date drew close, the long-range forecast showed overnight lows in the teens. I spent my remaining evenings plumbing shut-off valves to prevent water from accessing the external lines. After installing six shut-off valves and stuffing every cavity with insulation, we hoped for the best.

Saturday, October 13th, we hit the road trying to beat an approaching snow storm. After seven hours of driving, we headed into the mountains with huge snowflakes coming down and the temperature dropping like a rock. 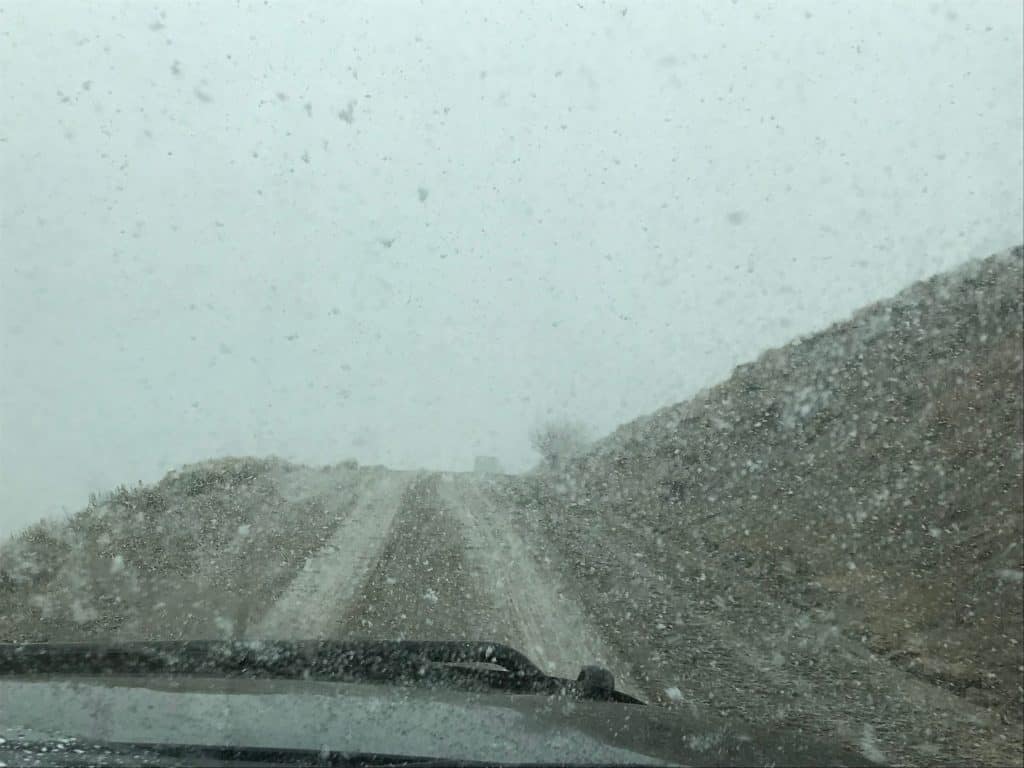 We arrived at our campsite after battling torturous roads for an hour. One family already had a snug camp set up. Zak and Cierra (our daughter) began setting up their wall tent while Pam and I got the camper positioned and stable.  Zak’s twin brother and his family, along with their parents arrived late that night. We finished making camp while the storm waxed and waned. 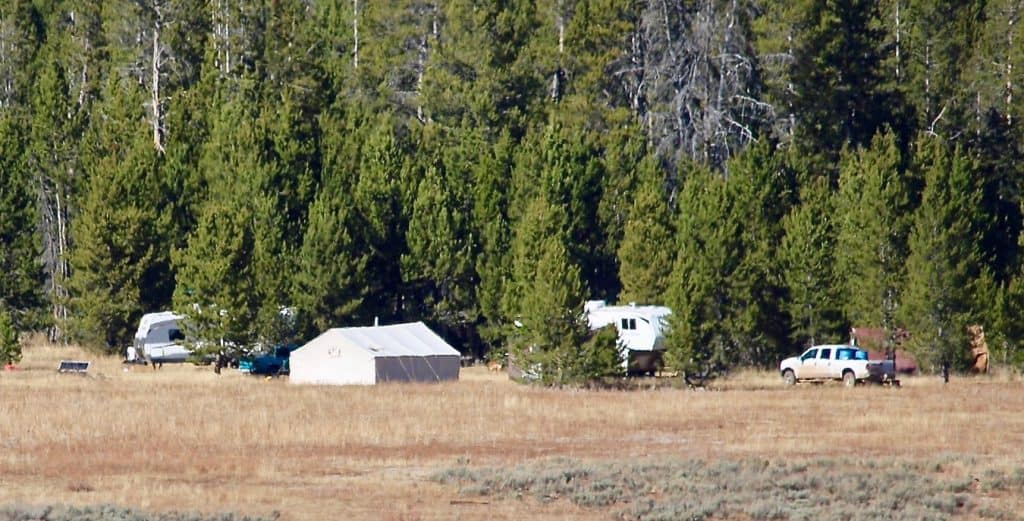 Our camp crew consisted of ten adults, five kids, and three dogs. The womenfolk had determined a schedule, a menu, and who was responsible for each meal. The ladies had planned breakfasts and dinners, and each party was responsible for its own lunch. Believe me, it takes a lot of food to feed a crew of hunters! We typically cook in dutch ovens over charcoal. The Copernican nature of the largest wall tent was evidenced each evening as everyone gathered for dinner and to recount the day’s events. 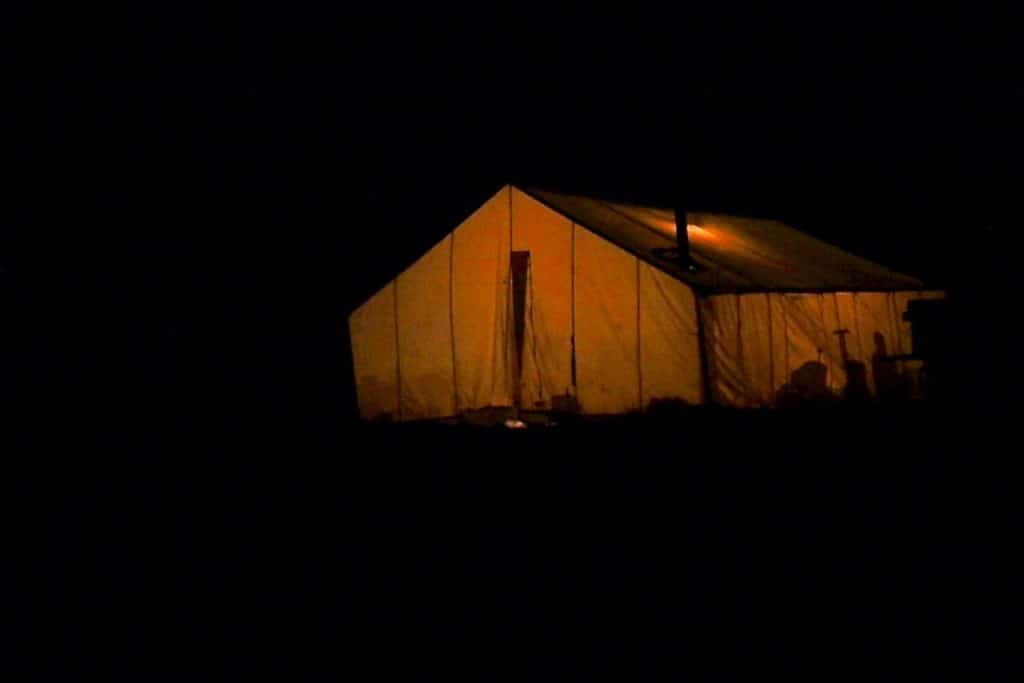 October 14th arrived sunny, cold and clear. Between the sun and the ground temperature, the snow in the open areas rapidly disappeared. We scouted the various drainages in the area and made a plan for the next morning. Pam and I, along with three others, would be situated on a drainage while the remainder of the party would push through the forest. If Pam and I weren’t successful, we would climb the ridge and push through the trees on the other side of the drainage. (Before GPS, we relied on topographical maps to ensure we were hunting in the right area. Now, even without cell service, we can map our locations on our phones using a downloaded topographical map.)

October 15th– Opening day!  There are multiple reasons for the exclamation point.  First and foremost it was opening day. The excitement was palpable. Coming in a close second was the fact that the forecasters were wrong and the overnight low was 4ºF.  The idea of sitting on a frozen hillside in the predawn darkness with the temperature barely above zero elicits its own exclamation point!

At sunrise, as we sat on the chilled earth, a shot rang out further up the drainage. Our senses heightened, we scanned the creek bottom and surrounding timber. A movement caught my eye and I could see a cow elk threading her way down through the timber as she came toward the creek bottom. I told Pam to get ready as the elk would be quite close (by my standards). The elk paused between two trees and I expected Pam to shoot at any time – but she didn’t! The elk moved into the open sage above the creek and stopped to check for danger. An interminable amount of time passed and still Pam didn’t shoot.  Suddenly a shot rang out as another of our party made an improbable shot and dispatched the elk.

As we made our way down slope to help with the elk, I asked Pam why she didn’t shoot. She couldn’t find the elk in the scope. Unfortunately, I had to issue a mea culpa, as I realized I had left her scope on the highest power when I sighted her rifle in. With two elk down, my concerns shifted to bear safety as we saw plenty of evidence of their presence. 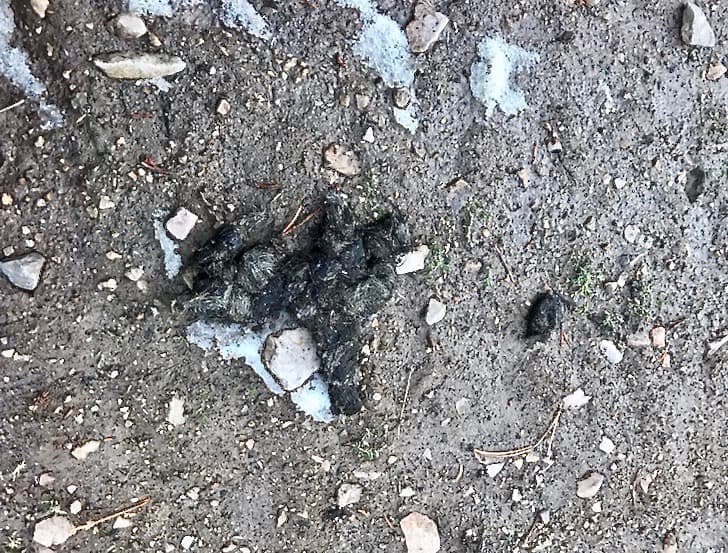 October 16-19: The rest of the week found us alternating between sitting at natural crossing points, hiking the ridges, and peering through dendritic screens formed by the foliage. We had other opportunities to harvest an elk but were unsuccessful. 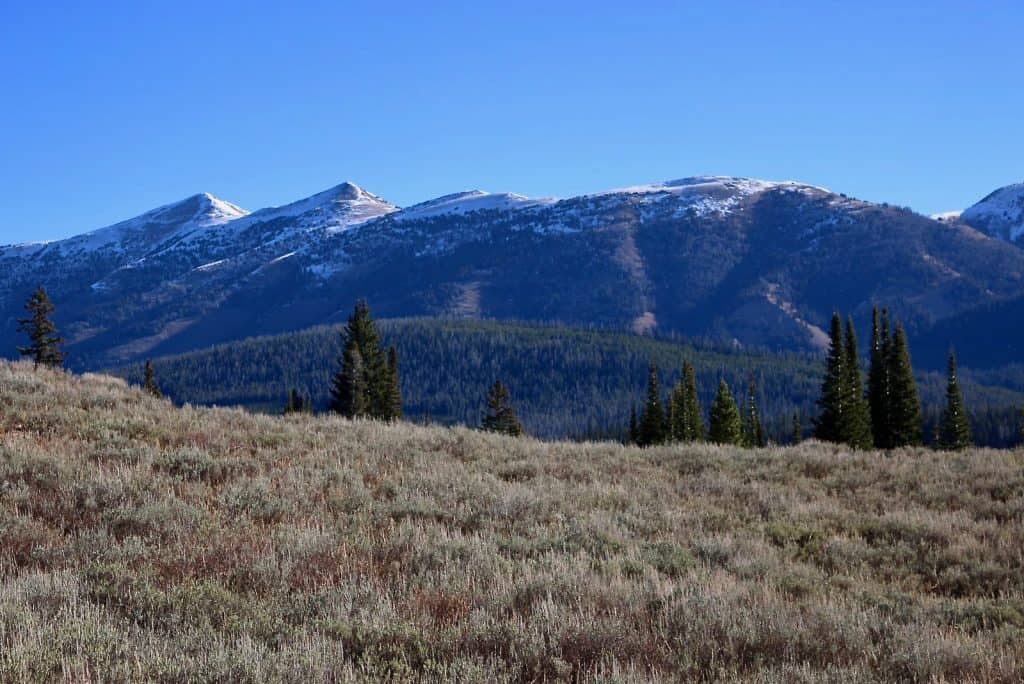 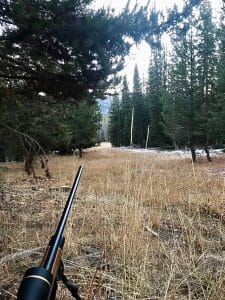 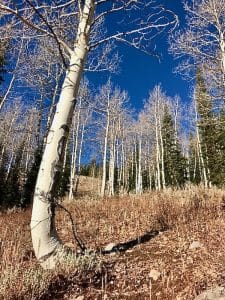 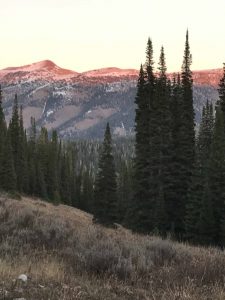 Others in the party were quite successful and we spent hours quartering and packing out the elk.  We had decided to pack up a day early, but we would hunt that last morning. 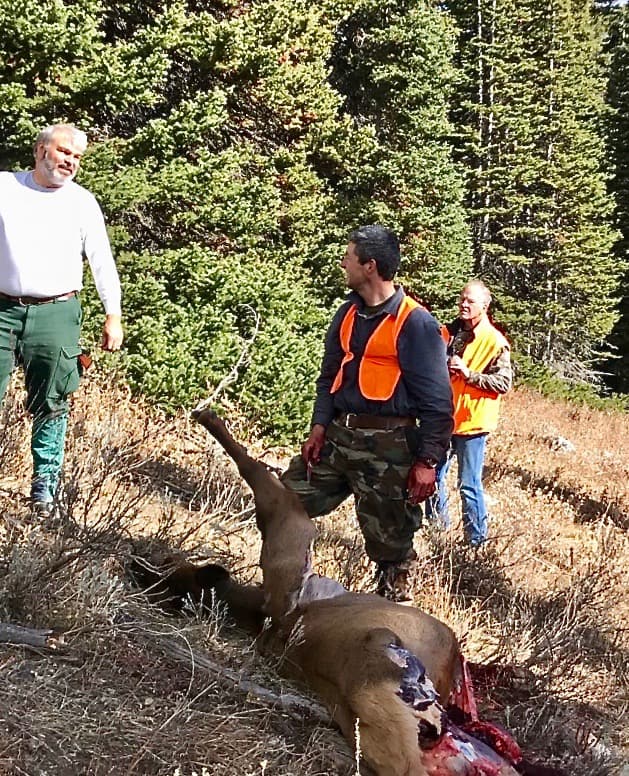 Pam, Zak, and I would hunt the top of a drainage while others would hunt the lower part. Just after sunrise the elongated echoes of shots shattered the silence and stillness. Zak’s dad capped off the week with a magnificent bull. Due to the time constraints of packing out the meat we certainly didn’t end up leaving early. After dressing and quartering the elk, we took a short cut out that required fording the Greys River, which runs about thigh deep at that time of year. 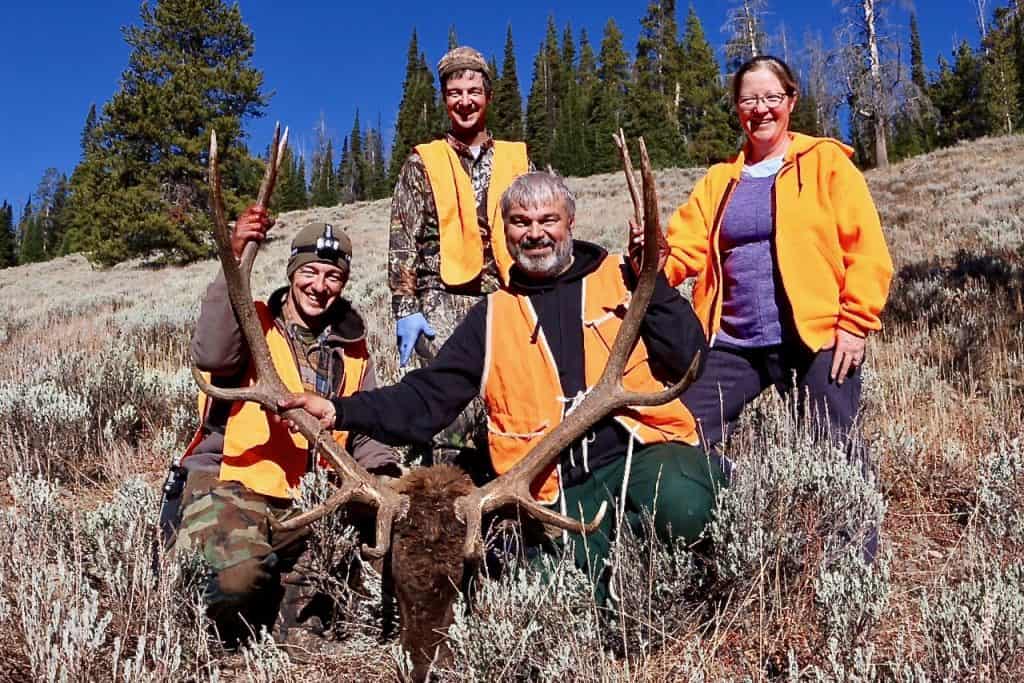 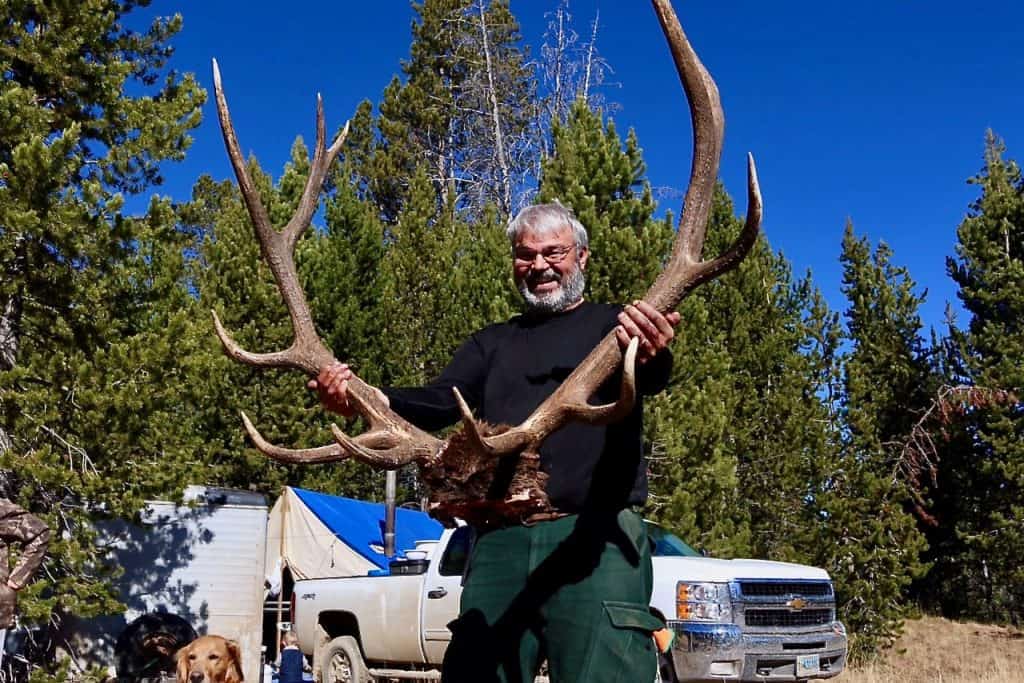 Elk Camp 2018 was a great adventure, and even though neither Pam nor I harvested an elk, I took solace in the fact that apparently neither did Orion since he was still camped above us the final night. 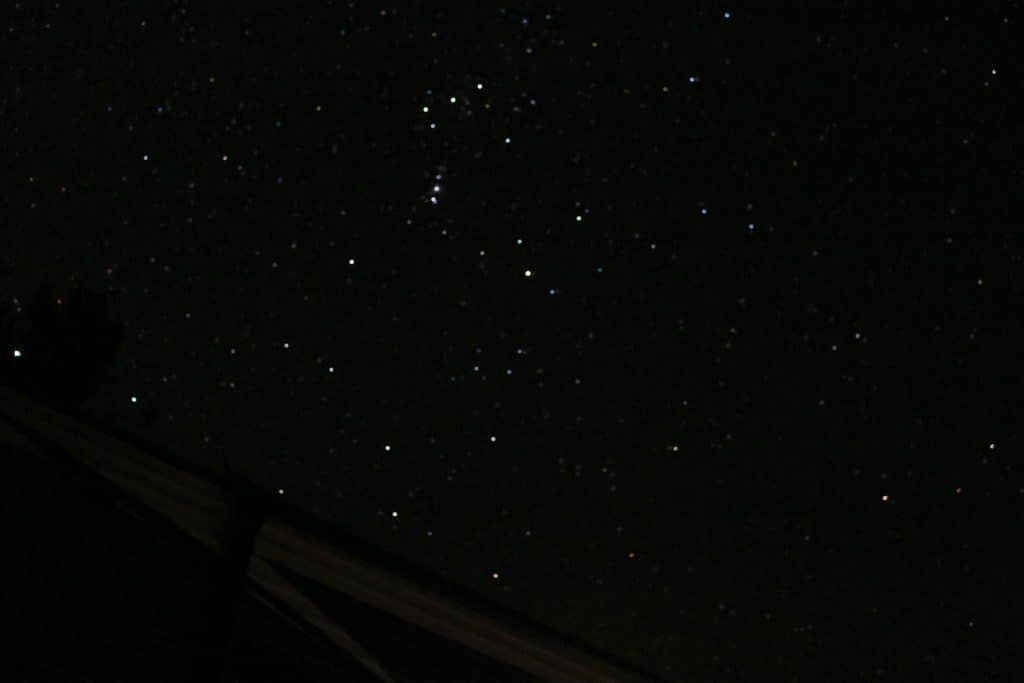 The Orion constellation, brilliant in the Wyoming night sky.

In addition to great camaraderie, hunters reap so many fringe benefits of being out in the wild – from soaring eagles, to blue birds, to silvery moon light! 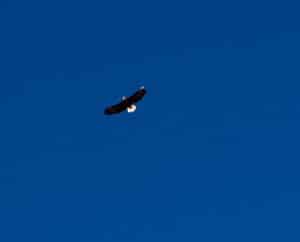 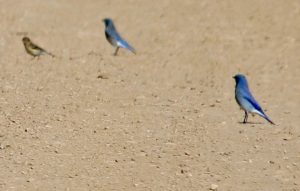 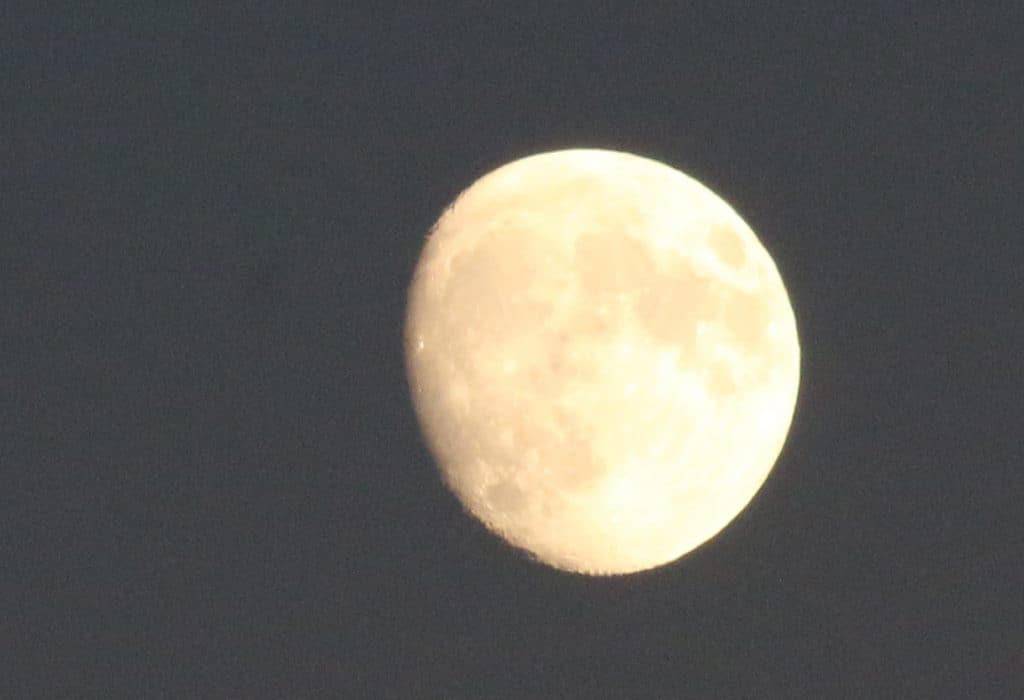 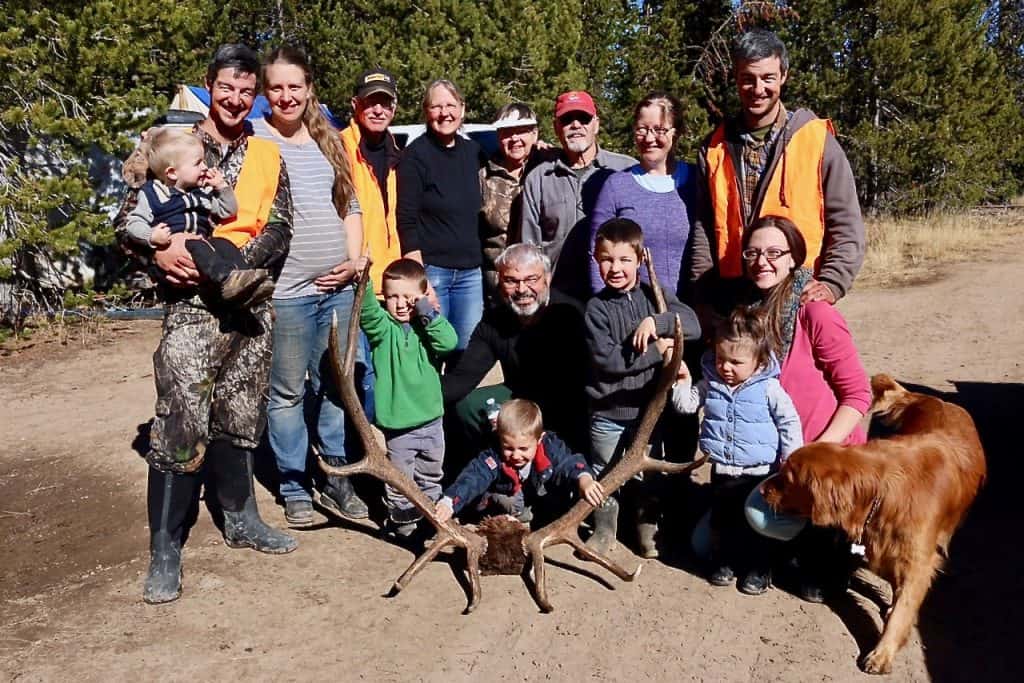 All photos property of Andy Bartosh, used with permission. Hey there! I'm Aileen, and I'm so glad you're here. In this post-career season of life, my days are filled with caring for my mama and husband, loving on my kids and grandkids, and {gasp!} writing! I write about what I love -- home, faith, family, books, travel, inspiring people and whatever else catches my fancy. Let's get acquainted!